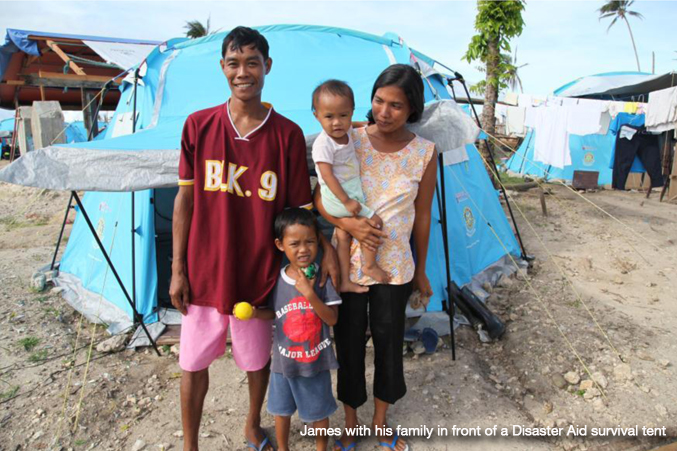 The past several months have been a very rewarding time for one of the NDY Charitable Trust supported charities, Disaster Aid Australia.   The rebuilding of four communities in the Ban-ao region is testament to the commitment of the amazing volunteer DARTs (Disaster Aid Response Teams) and DAA Deployment Manager, Ed Cox. Faced with a disaster zone, they never lost sight of their goal to make a difference by rebuilding communities for those who lost everything following Typhoon Pablo (Bopha).

For six weeks they cleared thousands of coconut trees to make way for our communities to be built with the assistance of our valued partner in the Philippines, the Balay Mindanaw Foundation.

The following story is from this deployment and reflects the impact DAA have on the ground following a disaster.

“When the typhoon came, my brother Jessie went to the evacuation centre: this is where he died.” James is now looking after his family of five and his story is common among the survivors of Typhoon Pablo that hit Mindanao.

Many people went to the evacuation centres, schools, municipal gyms and day care centres. This is where the majority of the 1000 deaths happened, as the buildings had no chance of standing up to the force of Typhoon Pablo.

James fortuitously ignored the Government advice of sheltering in the evacuation centre and decided to look after his family at home.

The storm was more powerful than anyone imagined. It smashed its way into Baganga and headed west, leaving in its wake a path of destruction, buildings crushed like aluminium cans, and coconut trees all strewn across the ground pointing to the typhoon's path.

The inhabitants of Ban-ao spent a terrifying night holding their loved ones close and praying for protection. "I told my family to hide under the table in our home," says James. "Our home was totally destroyed".

When it was safe to do so, James took his family up into the hills and told them to take shelter behind a large tree, as he went to find help. It is on his way to look for medicine for his mother and children that he found out about his brother and his nephew who were among those that perished in the Ban-ao municipal gymnasium.

Now James is rebuilding his life with his family and the family of his brother Jessie. "One of the first things we needed was shelter, the children were becoming ill and we didn't know what to do.

“Disaster Aid was the first NGO that came to us to help, we are so grateful and my family is so happy now".