As a global multidisciplinary engineering consultancy and leading projects firm, Norman Disney & Young (NDY) has been synonymous with a vast number of landmark and award-winning commercial projects. Highlighted by its groundbreaking work on Eureka Tower in Melbourne – Australia’s tallest building and one of the tallest apartment buildings in the world – NDY has also been contributing to an array of large-scale residential projects. The latest of these at Jacksons Point in Sydney is a true showcase of the effortless fusion between cutting-edge design and best-in-class engineering.

As one of Australia’s most prestigious waterfront redevelopments consisting of 5 separate stages, Jacksons Landing is located on the tip of Pyrmont Point alongside Sydney Harbour. NDY was engaged by developer Vivas Lend Lease to undertake detailed design and documentation of mechanical, hydraulic, fire and lift services for stages 3 and 4: the two Jacksons Landing Towers, ‘Sugar Dock’ and ‘Silk’.

Sugar Dock and Silk are 23 and 20 storey towers respectively and collectively consist of over 220 apartments and 6 levels of car parking. Sugar Dock was completed in January this year while Silk is due for completion by mid 2012. Although the buildings are connected, NDY was required to provide an innovative services solution that would allow the effulgent towers to be constructed at different times.

“The development is broken up into a series of stages. The first 3 are built, stage 4 is in construction and stage 5 is a future building,” says NDY Mechanical Engineer, Aaron Versace. “Stages 2, 3 and 4 are connected by a common car park, which, under the BCA makes them a ‘United Building’ meaning that the services are shared between the buildings. NDY has completed the design for stages 3 and 4 and in order for the staged construction to be possible, we had to consider the shared mechanical ventilation and fire protection services.”

By working closely with the project design architects and builders, NDY have ensured that plant and riser space is used as efficiently as possible, utilising 3D CAD technology to aid with coordination of services, structure and architecture.

According to Versace, a cost effective and energy efficient air conditioning system consisting of reverse cycle units has been installed. This allows for simultaneous heating and cooling with minimal plant space, a centralised condenser water system and gas-fired boilers.

“The car park is ventilated mechanically via dedicated extract and supply fans controlled on levels of Carbon Monoxide (CO) within the car park. As the stage 3 and 4 car park is shared, the system was designed during stage 3 to be capable of ventilating the entire car park when combined. These systems were installed as part of the stage 3 construction with all of the fans installed with Variable Speed Drives (VSD) meaning that the fans could be commissioned in two stages – for stage 3 car park only and then when stage 4 is built, recommissioned to ventilate the entire car park.”

This innovation in energy efficiency has become a mandatory request by developers, an initiative that has been employed at the mixed-use residential/hotel complex, The Royal, on the NSW northern coast. 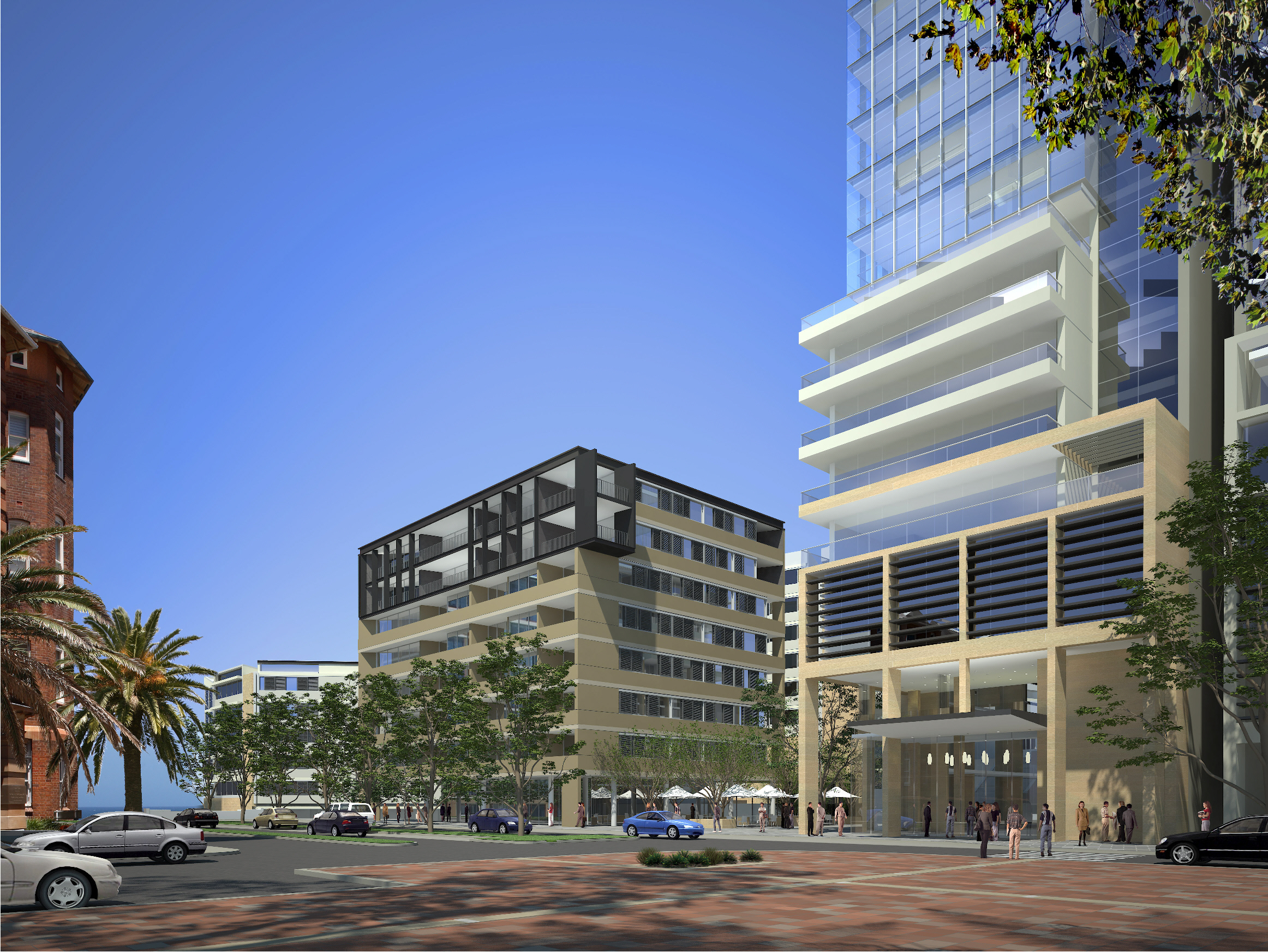 “The entire project was designed to very precise spatial limitations in order to maximize the flexibility of layout of apartments and number of floors on building 3. The project has incorporated low carbon cogeneration technology and has BASIX for the smaller 2 buildings.”

NDY undertook load analysis of the domestic hot water demand to determine the optimum size for cogeneration to ensure carbon efficient operation. An interface with cogeneration systems was then designed to provide primary hot water heating to the hotel and wider site, wet services to all apartments and hotel rooms and siphonic rainwater systems.

Being involved in the full design process from inception to installation, allowed NDY to consult on a broad range of mechanical services. “Air quality was of paramount importance to our client in this development,” says Linger.

From exclusive beachfront apartment living, to inner-city housing for below the poverty line residents, this attention to detail is a non-negotiable in residential design and building. So for the NDY Melbourne team, working on the innovative Common Ground Supported Housing development was an opportunity to employ this expertise on a project with far-reaching consequences.

The $57 million Common Ground project, located in the Melbourne CBD, isa partnership between HomeGround Services, Yarra Community Housing, the Victorian Government and the builder Grocon. A disused site was redeveloped to provide a new building including self contained residential units with onsite support services including employment services, medical and mental health. The majority of units are allocated to people with urgent housing needs and the remainder to families on low incomes. The building also provides operational offices for YCH and HomeGround, as well as community facilities for tenants including a green roof garden.

This model of self-contained permanent housing, combined with a high level of onsite support and a sustainable social mix, has been pioneered in the US by the New York based housing organisation, Common Ground. The recognized social benefits have also been translated to a number of economic benefits through reduced dependence on high-cost services such as emergency and inpatient health and mental health services.

NDY consultant Joanna Kurowski was one of the mechanical services consultants on this build and took over as project coordinator during the final stage of construction. According to Kurowski, the tight fiscal constraints of the project posed some unique challenges. “As a community housing project, the services were still required to be of a high standard yet remain within a strict budget.

“In terms of mechanical services, the greatest obstacle was to overcome the requirement for the building to be naturally ventilated rather than serviced by air-conditioning systems. This is quite a challenge as the natural weather conditions in Melbourne can be quite extreme and unpredictable. Because of this, the building had to be thermally modelled by the NDY ESD team which in turn enabled us to determine what type of glazing and window openings would provide optimum performance.”

From a design perspective, the buildings inner spine is key to the ventilation. The apartments are arranged around a central void which is open at the top of the building with a roof canopy. The common lobby access to each apartment is open to this void, with a balustrade rather than an enclosed void, which acts as a path of ventilation between the apartments and the central void. Airflow modelling was conducted to ensure that such a setup would not only be efficient but also provide reasonable ambient conditions in the hot summer months.

NDY developed a comprehensive and detailed ESD strategy for the project, with the overarching objectives of reducing environmental impact, in particular greenhouse gas emissions, whilst maintaining a high level of indoor comfort and environmental quality for residents and reducing utility bills.

The development has a much smaller carbon footprint than standard buildings of an equivalent size – energy efficiency initiatives are estimated to achieve at least a 25% reduction in greenhouse gas emissions.

Key features include a high performance façade and glazing (reaching an average 7 star FirstRate/NatHERS rating) and natural ventilation, which reduces the need for traditional air conditioning by maximizing comfort levels through passive air flow, facilitated by the buildings design around a central void. Extensive modelling was carried out to optimise the façade and glazing and to ensure the effectiveness of the natural ventilation to avoid overheating.

NDY used the Green Star Multi-Unit Residential Pilot Tool as a benchmark to guide initial design and ensure design team members fully integrated the agreedsustainability targets into their drawings and specifications from the earliest stages.

This development in the Melbourne CBD is a leading example of high-performance sustainable design, one that goes way beyond skin deep.

Circular Quay Renewal Investigations – What Lies Beneath? How BIM & Data Services are Uncovering 170 Years of History