Geothermal: The other sustainable option

When most people hear the term Geothermal, they usually think of large-scale power generation. But Geothermal is a viable, clean heat source that can provide substantial operational cost savings for many precinct level developments – even in the middle of a busy city.

Geothermal has long been considered a viable way of generating power, for individual building or small precincts. However, the start-up investment for a facility capable of powering a city is considerably greater than other clean energy sources, such as solar or wind. A key difference is that Geothermal also offers a reliable, cost effective and unobtrusive solution to the heating needs of precinct developments and public facilities.

NDY Associate Director Jeff Dusting has worked on several Geothermal heating projects, and believes that there can be significant operational cost benefits as well as improved occupant experience with a localised geothermal system. “In the right project, Geothermal can lower operational costs, as well as providing a near-neutral carbon footprint for the precinct,” he says. “This operational saving improves cash flow for the owners, as well as lowering the expenditures of tenants and users of the facility. One recent example is Scarborough Pool in Perth. The Geothermal system is so efficient that there is no requirement to use solar blankets or boilers for the outdoor pool. This also saves on staff time, keeping costs down even further.”

What exactly is geothermal?

Geothermal is essentially using the natural heat found deep underground to power or heat a building above ground. This can be ambient heat from over a kilometre underground, or tapping in to water sources that are heated by underground activity, such as geysers or hot springs.

This same heat can be used to generate electricity by boiling water (or a specialised liquid such as pentane) so that it generates steam and turns a turbine on a dynamo, generating power. Geothermal power generation can be a sophisticated process, but as a source of heat, the process is much simpler. 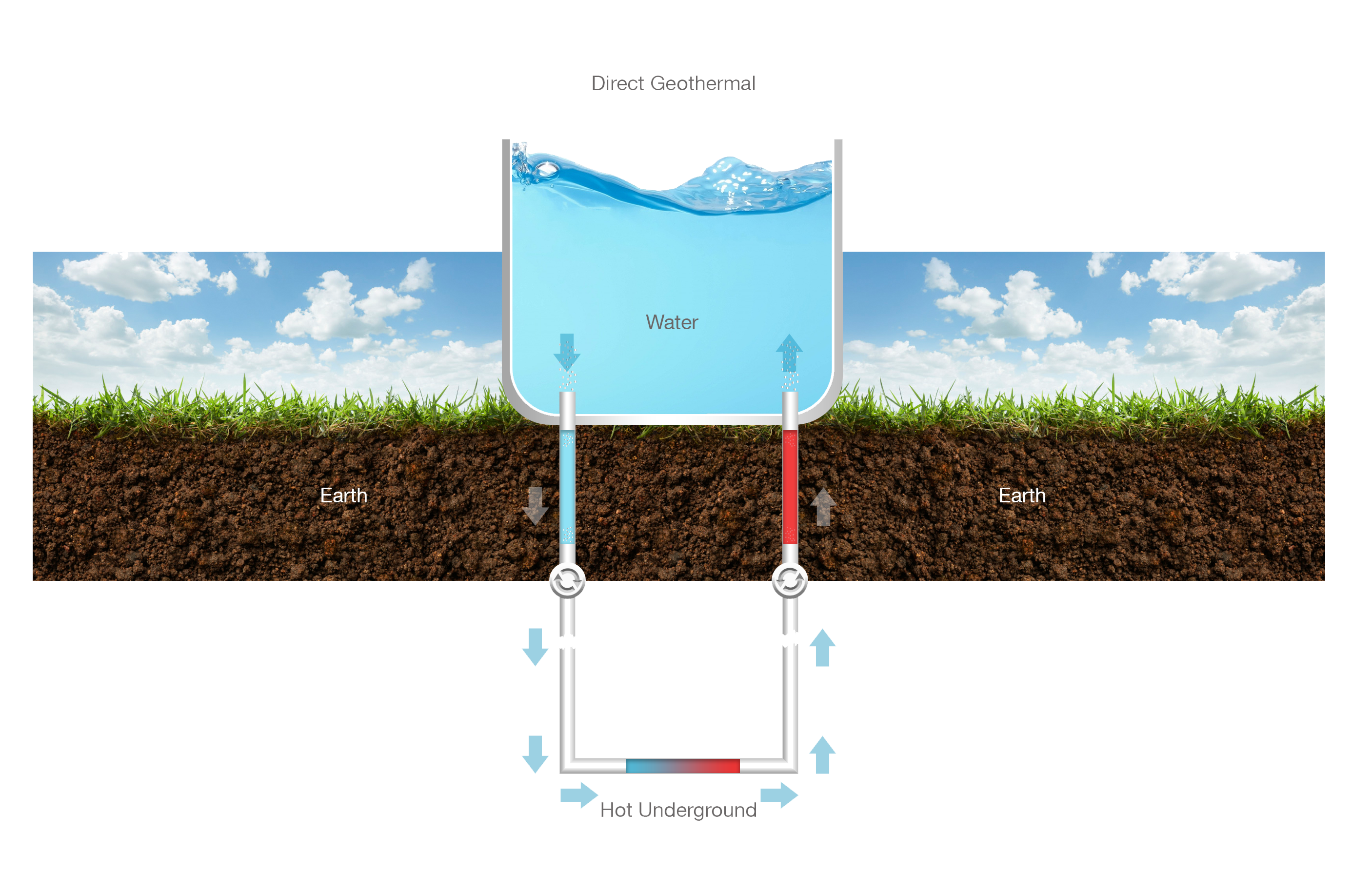 Geothermal power generation requires temperatures high enough to boil water, requiring very deep wells and pipes. This increases the initial cost considerably, however, the temperatures for heating a building to comfortable levels are substantially lower. This means that the depth and complexity of the system can be reduced, making it viable for much smaller scale projects. 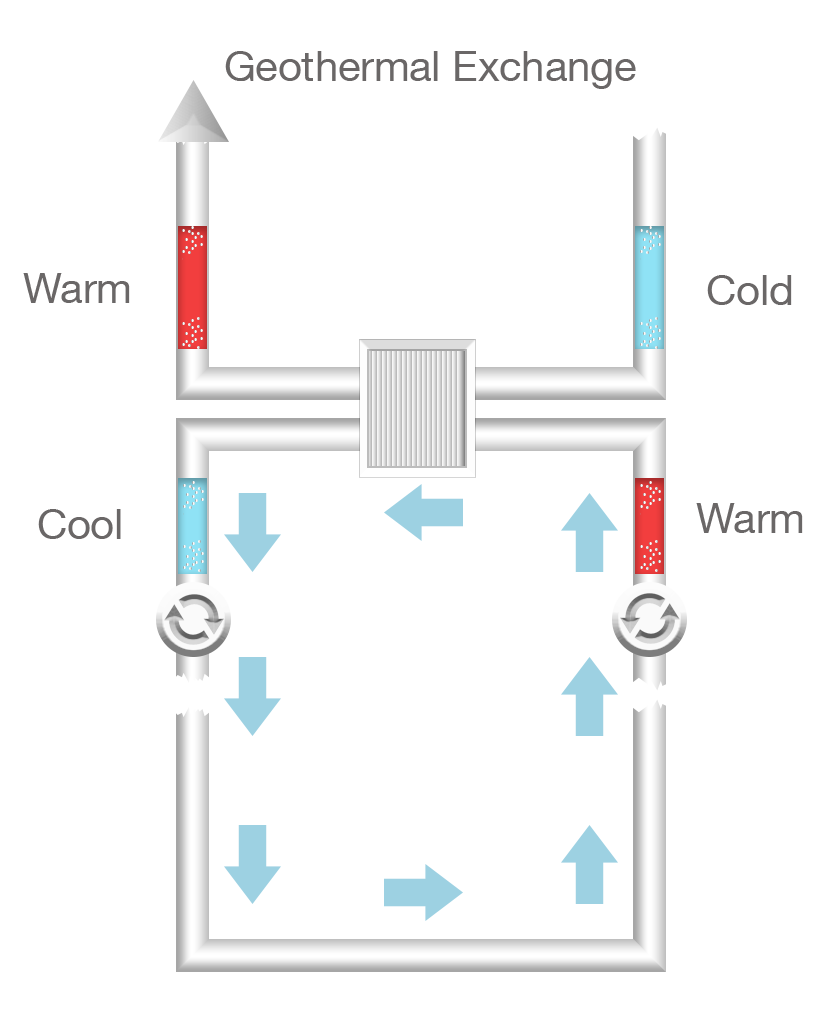 Indirect uses heat from deep below the surface to heat a refrigerant, which is then used to warm up the environmental systems. The Scarborough Pool in Perth uses this type of system, providing with a constant supply of warm water to keep the pool heated and comfortable all year round.

Direct geothermal energy uses pipes that are sunk just a few metres into the ground to extract heat in winter for heating (through direct heat transfer through the metal, or via a refrigerant pumped through the pipes) and to sink the heat in summer, cooling the building.

Some buildings can utilise both systems simultaneously. NDY designed one of the first geothermal projects in Manchester. The First Street Site is a 250,000 sq m mixed use development that utilises a ground source heat pump that taps into the heat capacity of the ground, which at 12m below the surface remains fairly constant. This improves the efficiency of the building’s heating and cooling plant. Closed loop boreholes effectively use the ground as a heat “sink” throughout the year whereby energy from the ground is either rejected (cooling) or absorbed (heating) into the system.

The borehole array can then be connected to a series of water-cooled variable refrigerant flow (VRF) units, which provide both the heating and cooling for the building. This complements the other boreholes that were installed at a depth of 150m. These boreholes have the potential to provide up to 300kW of peak heat rejection, representing over 20 per cent of the cooling demand for the building. In heating mode, it has the ability to deliver 188kW of heat absorption, as well as keeping the “ramp up” costs down when heating or cooling is turned on for the day.

“These geothermal systems don’t generate electricity, but they save a lot of it in the building,” says Jeff. “Energy use in buildings accounts for about one quarter of Australia’s greenhouse emissions, and over half of this is for heating and cooling. With a geothermal system, we can slash the carbon output to basically nothing, and minimise the ongoing heating and cooling costs for the project,” he adds.

The project used ground source heat pump systems to access the heat capacity of the ground, which at 12m below the surface remains fairly constant to improve the efficiency of a buildings heating and cooling plant. Closed loop boreholes effectively use the ground as an energy “sink” throughout the year whereby energy from the ground is either rejected (cooling) or absorbed (heating) into the system.

The ground source heat pump and borehole solution takes advantage of the moderate temperatures in the ground to boost the efficiency of the mechanical systems and reduce the running costs of heating and cooling plant.

The biggest advantage of such systems is gained when heating and cooling is carried out throughout the year, as the heat rejected in summer is stored in the ground and used for heating in winter.

“There’s this school of thought that geothermal is only for new buildings,” Jeff says. “That’s just not the case. There are many ways to integrate a cost-effective geothermal solution into an existing building, even in a major metropolitan area.”

NDY has refitted several buildings with geothermal systems, including X Y and Z.

“Pools and aquatic centres represent a large number of our geothermal projects,” says Jeff. “The heat requirements of these facilities make geothermal a very attractive option, with a very short payback period.”

By using renewable energy to heat the water, rather than traditional gas boilers, hundreds of tonnes of Carbon are saved, as well as significant operational costs. At the Scarborough pool, the City of Sterling estimates that the geothermal system saves them around half a million dollars in heating costs per year, a saving that allows the council to put funds to much more practical use. 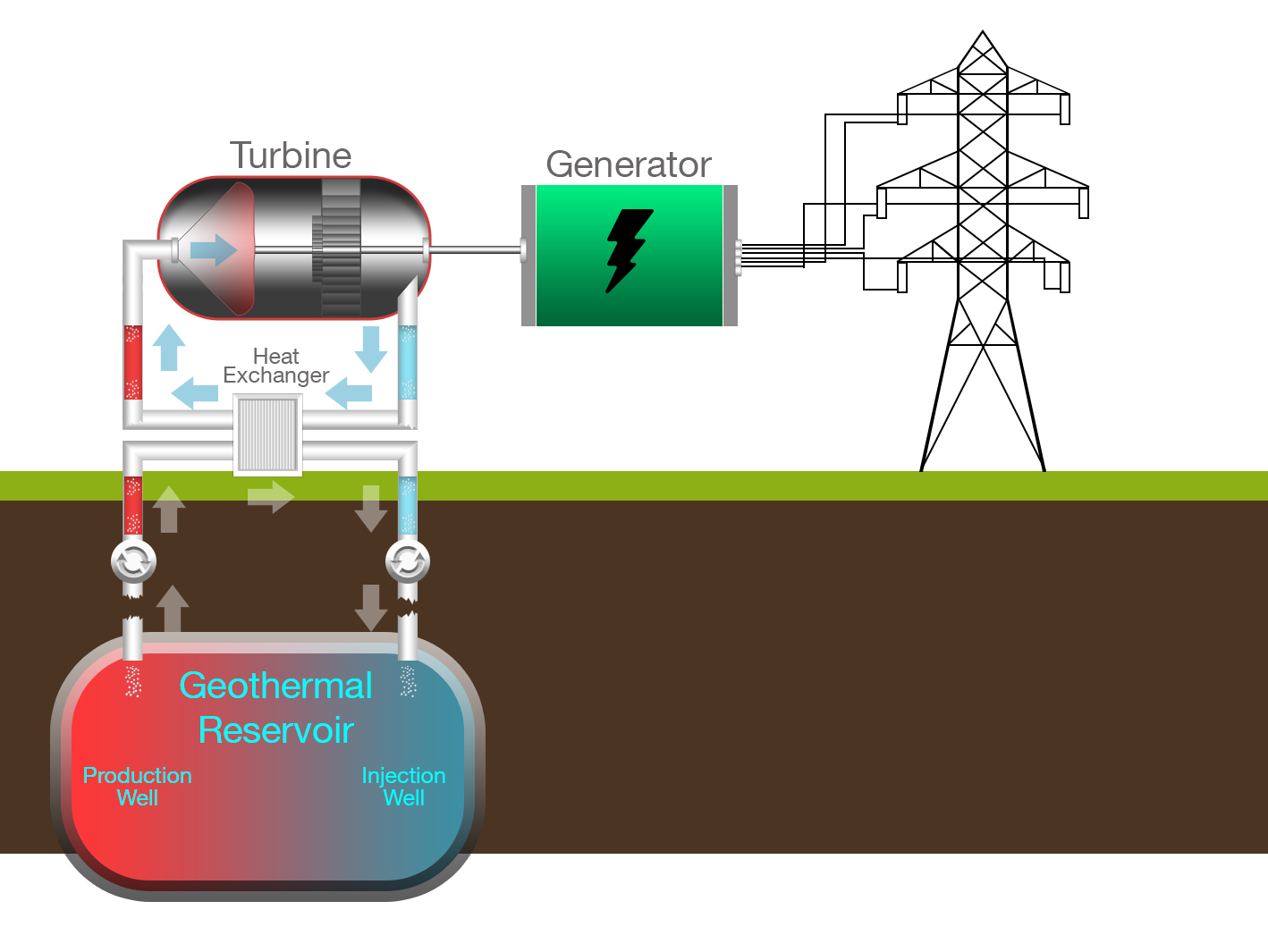 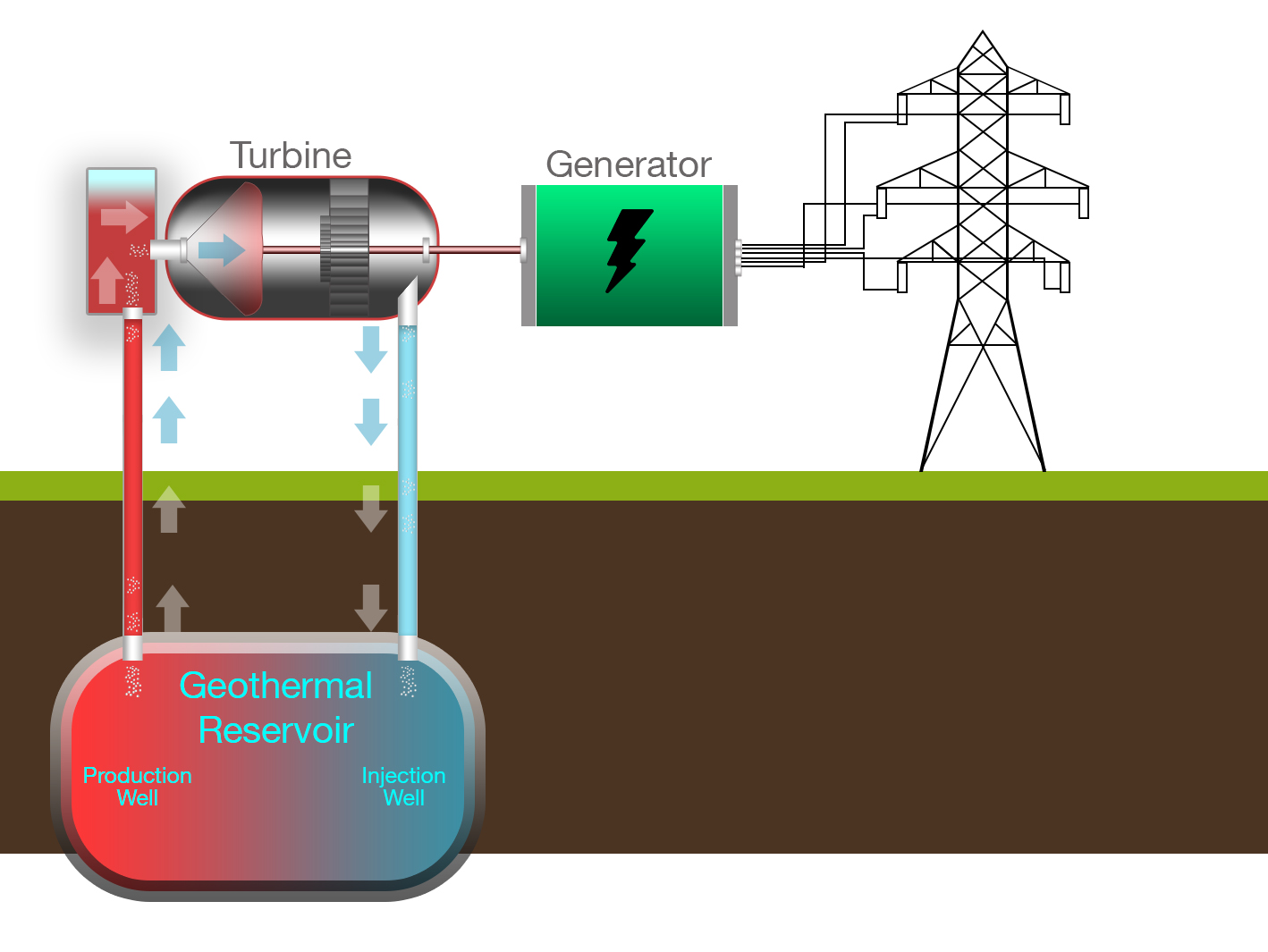 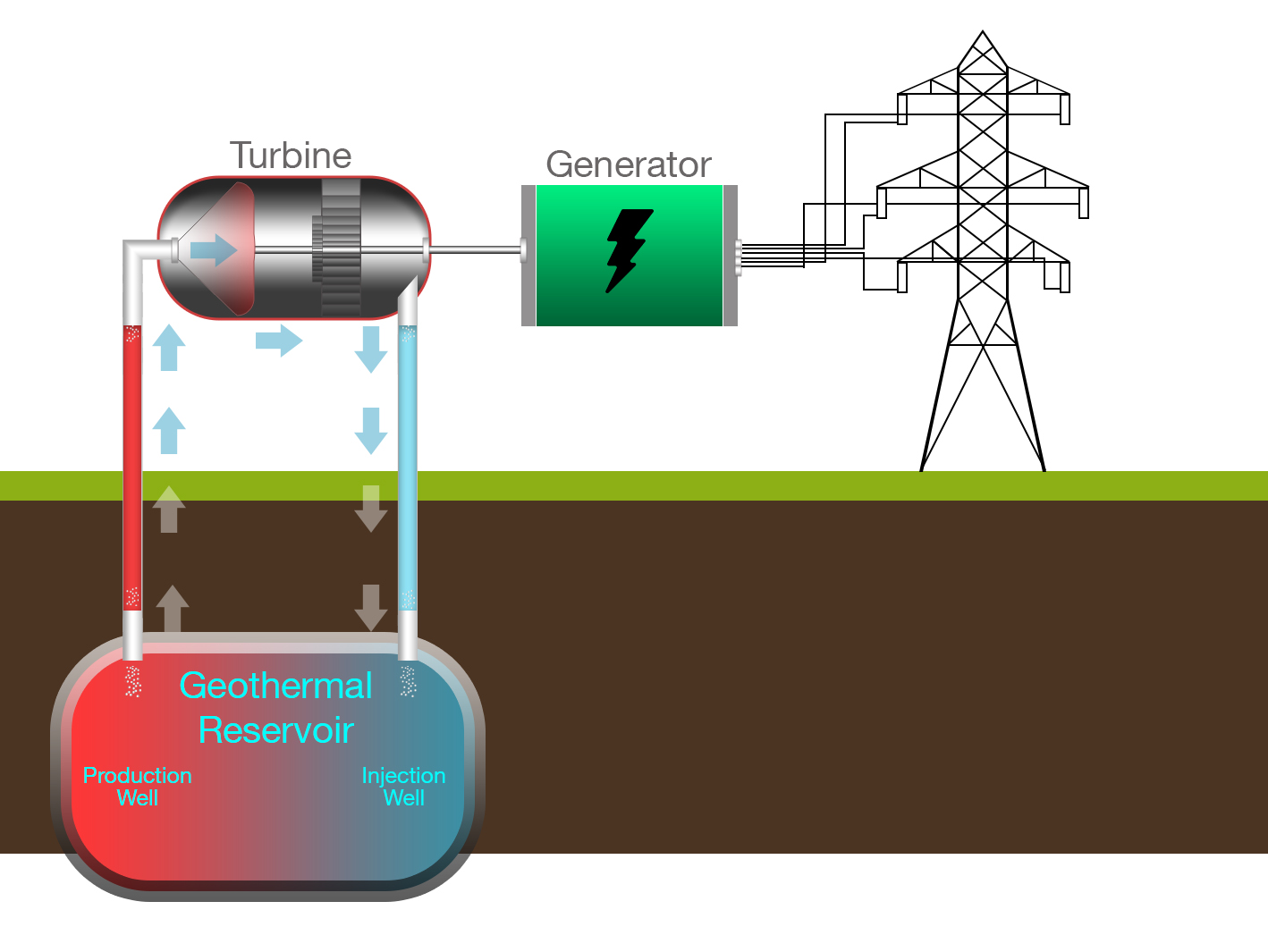 The Benefits of Geothermal

Unlike other renewables such as solar and wind, geothermal is always operational. The temperature of the rock deep underground is reasonably constant, making the system predictable and efficient.

The simplicity of the system means it’s cheap to operate. Initial setup can be expensive, but this can be rapidly offset by operation savings.

Even if the system is taking advantage of a natural reservoir of water underground, with proper management, the water taken can be less than the water that feeds into the system. A closed loop system takes nothing from the environment except heat, making it a very low impact method of heating.

A simple solution, even at a small scale

The system essentially has just a few basic components: Underground pipes, some pumps, and a heat exchanger. By keeping it simple, maintenance costs are reduced.